Cereal Rye or Rye Corn is a winter-spring cereal that is relatively inexpensive and easy to establish.
Few other cool season green-manure crops are as productive on poor soils. Rye used as a green manure serves as a storehouse of soil nutrients for a following cash crop. Cereal rye can be used to build up the fertility of sandy, infertile soils.
The plant’s extensive root system can take up excess soil N. This N then slowly becomes available to subsequent crops as the residues gradually decompose. Rye roots can also extract potassium and other nutrients from deep in the soil profile and bring them to the surface, where they become available to subsequent crops. Expect considerable fertility improvement in the topsoil when growing rye.

Cereal rye outperforms all other cover crops on infertile, sandy or acidic soil. It is widely adapted, but grows best in cool, temperate zones. Cereal Rye has the ability to withstand adverse weather conditions and is able to handle cold and limited waterlogging as well as being drought resistant. The ability to withstand sand blast enables it to produce a soil-binding cover on land where other cereals won’t grow. It helps to control soil erosion and provide rapid spring growth, suppression of weeds thereby providing forage or grain for harvest.

Ideal for winter crop before spring or summer crops

Cereal rye prefers light loams or sandy soils and will germinate even in quite dry soil. It also will grow in heavy clays and poorly drained soils, and many cultivars tolerate waterlogging. Sow with legumes to offset this occurrence ie vetch Can tie up N in the soil.

Due to its rapid establishment, its deep roots, and speed to first graze, Cereal Ryecorn is ideal for:

It is also tolerant of high levels of aluminium (Al).

Rye can establish in very cool weather. It will germinate at temperatures as low as ~1°C. Vegetative growth requires ~3°C or higher.
It is used for early sowings as a dual-purpose cereal, providing abundant, quick,early stock feed, as a grain-only crop, and for erosion control.
Cereal rye is adapted to all soils; however, its major fit is on the lighter acid soils where yields are usually 70–100% of wheat and triticale when sown between May and June.

Cereal rye is relatively tolerant of many cereal diseases (i.e. take-all, and rusts) making it a useful break crop following grassy pastures.
Crown rot is of concern and growers should select paddocks with a low risk of the disease. Paddock histories likely to result in high risk of disease such as crown rot include: 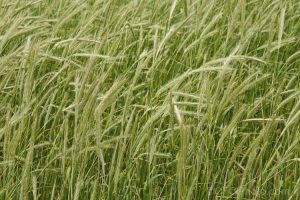